The ultimate driver for the value of $SUSHI is trading volume, so pool rewards should incentivize volume as efficiently as possible.

Currently, SushiSwap’s stablecoin pairs ETH/USDC, ETH/USDT, and ETH/DAI have higher reward multiples than almost all other pools, but they are underperforming on trading volume.

Three of the top five top pools by liquidity are stablecoin pairs:

But only one of the top five pools by Volume is a stablecoin pair: 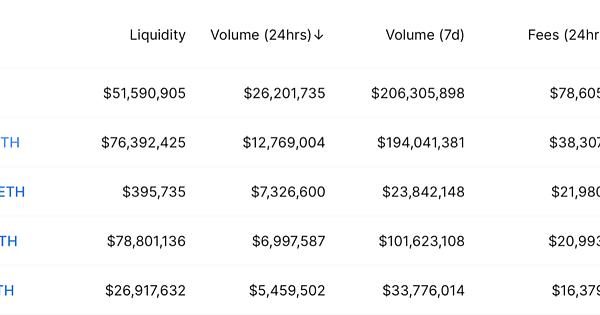 In other words, these pools have a lot of TVL but this liquidity is mostly dead weight that isn’t actually driving trading volume and accruing value to $SUSHI holders.

The relative underperformance of eth-stablecoin pools has only increased in the last few days since Uniswap announced token rewards for these same pairs. Uniswap’s ETH/USDC, ETH/USDT, and ETH/DAI are far more liquid, due to aggressive, concentrated $UNI rewards.

A big portion of trading volume for AMMs come from aggregators like 1inch and Matcha, which route orders to wherever they can get the best fill with the least slippage. Trades with these stablecoins are much more likely to be routed through Uniswap due to the mega liquidity there, and this is unlikely to change anytime soon.

The good news: while SushiSwap may be unable to compete right now with stablecoin pairs, it is showing stronger traction with alts. It has higher volume than Uniswap for YFI, LEND, SNX, COMP, YAMv2, and other DeFi coins.

The proposal is to double down on what’s working while removing resources from what isn’t, in order to optimize trading volume and increase value accrual for $SUSHI holders:

By optimizing incentives, SushiSwap can have the best APYs in the world and highest trading volume for “blue chip” DeFi tokens like LEND, SNX, and WNXM. This will likely be a booming, growing market in the months and years ahead.

By shifting rewards away from stablecoin pools, TVL may take a temporary hit, but liquidity will be more efficient and volume should increase, and that’s the bottom line for accruing value to $SUSHI holders.

I’d be for slashing emissions on stablecoin pairs by 50% and redistributing the sushi to the top 3-5 highest volume pools, maybe updated weekly? also +1 on giving rewards to swrv/wnxm pools

This makes a lot of sense, but I am hesitant to give up anything that is generating over $1mm/day in volume, even if we think there is opportunity cost. Also our TLV will go down, which i widely watched. How much SUSHi would we save in a week if we implemented it today? Are there other pairs in the farm with less volume/liquidity that could save us a comparable amount?

Totally agree we need to review the pools an reward levels… Made a more general proposal to get us started with updating farms: Rotate the pools we incentivize

I totally agree with this plan. It’s true to improve the popularity of sushi. Now the price of sushi is not as good as Uni