Sushi has engaged legal counsel to provide advice regarding the planning & execution of Sushi’s legal structure. Based on the previous discussions of Sushi organizing an entity framework for the DAO & products, the purpose of this post is to serve as an updated plan, seek community dialogue, and ultimately make its way to governance for execution.

The purpose of the entity structure & framework is to provide maximum flexibility for Sushi to proceed in whichever direction the DAO or governance takes it, while also mitigating risk.

Below is the advice from legal counsel regarding the creation and implementation of an entity structure and framework for Sushi.

The following entities will initially be formed for the Sushi ecosystem: 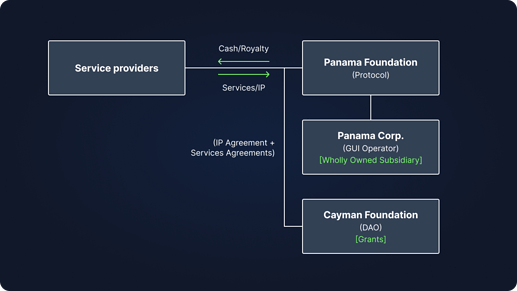 Alternatives considered?
Sushi looked into Swiss based entities. The use cases for Foundations & Verein (i.e., associations) were inappropriate given the current activities of Sushi. The regulatory stance toward Sushi products was less than ideal & the taxation model was not favorable to growth companies.

Timeline?
This whole process to set up the entity structure summarized in this post should take 4 weeks after confirmation via governance vote.

Quite a bit to chew on. I suggest adapting the timeline to allow more time for discussion. Not one to rush

This is promising and in line with what my previous CEX counsel recommended for Sushi.

Several Crypto and Web3 projects / protocols have engaged Fenwick for their legal knowledge. They have been involved in this space for quite a while, so following their lead towards structure makes sense. Glad to see this all coming to fruition.

This isn’t enough information to make a decision on. Going Panama/Cayman/Swiss/etc is secondary to what freedom this gives the DAO when dealing with state-level threats against DeFi products.

IMO the first and only question we should be asking is: WHEN state level regulatory attacks emerge, WHERE do we need to be domiciled in order to prevent ANY and ALL limitations of our products & services?

IMO any Head Chef must embody this core ethos, and let that lead any legal discussions/outcomes.

It is not acceptable for us to restrict these open source tools from any human who wishes to use them, period. Otherwise just go build on Amazon AWS, apply for a money transmitter license & call it a day.

In line with @mountain_goat said, I think this is not something to be rushed, which is why I’ve voted “no” for now. It is not an attack on the proposal, which I think is probably good. We definitely need a legal structure and I think this legal structure is likely a solid recommendation from our legal counsel.

My concern is that we have a lot of irons in the fire. A lot of big decisions being made right now. We are voting on new Head Chefs soon. We are voting on new multisig participants soon. It appears to me that the legal entities would have some impact on these upcoming votes. May impact our new head chef.

Appears the DAO Foundation will specifically impact the multisig in administering the treasury, grants etc.

Whomever is elected head chef may want to evaluate this proposal and its implications. As will multisig nominees.

Yes, the entity separation supports such a use case and moves sushi further into a decentralized ecosystem via the separation and autonomy of all these pieces.

Any of the challenges to achieve what you described is less on the legal and now more on the implementation details. sig holders vs no multisig for transaction approval, system for voting thresholds to automatically trigger actions etc.

I hear you, I would like to point out that voting no & seeking to move slower comes with the consequence of prolonging the risk & exposure to all that contribute to sushi, along with the project itself.

Perhaps that is an acceptable trade off to you but I would like to acknowledge the elephant in the room directly.

It is my goal that we throughly discuss the merits, analyze the recommendation details, the substance of the proposal, draw a conclusion that this is either a good idea or a bad one & proceed accordingly.

It is an entirely fair point and I respect it. Honestly, would love to see our nominated head chefs feedback on the proposal. @kagan (I think this is Jared C), @jaredgrey @Wally1 @SuperGenius. Does anyone know Andy’s handle?

Hey Nick, I posted a response yesterday on my HC Final Proposal post regarding the structure. It’s similar to the proposed legal structure that my legal from EONS recommended. It gives a lot of optionalities moving forward for Sushi to compartmentalize risk with the product stack and doesn’t rush over-compliance with regulation. However, HamletMachine pointed out in my candidacy post that he believes the structure is antithetical to Sushi’s decentralized ethos. As a community, I think it’s important we define what level of risk is acceptable for the project and then put in processes on how best to protect leadership and contributors. I think that’s the conversation we’re having now.

I’ve spent a bit of time helping Web3 projects get set up in the past 2 years and I’m glad to hear Sushi has dropped the Swiss option - unlike a lot of folks here, I’ve lived in Switzerland so I don’t suffer from any illusions about what the Swiss options look like in reality. Even if you are prepared to set up an actual office and employ Swiss staff, Switzerland doesn’t offer anything special from a legal standpoint. In our modern global economy, Switzerland is relying increasingly on maintaining good relations with the EU and US which means Switzerland is, by and large, operating consistently within the global trends, including with respect to crypto. The number of family banks prepared to do business with crypto businesses is shrinking and very expensive.

Ok, now I’ve got that out of my system, let’s look at the OP’s proposal:

In short: it’s great to hear this is making progress but more homework is required for the Sushi team…

It is true. We are paying for their legal expertise. We should probably strongly consider their recommendations.

I agree with @Neiltbe.

Regulation by enforcement is coming. Just get this done. It would be nice to have every question answered and everything done perfectly. But I’m not sure that’s possible and I don’t think you should spend the time trying. Do what you can to protect yourselves and your community.

Excellent point. I changed my vote and voted to move ahead on this suggestion. As things have become more clear in recent weeks via enforcement action.

Probably the other thing that has become clear to me is that they’re going to bring more enforcement actions in a down market b/c their targets are weakened financially.

And I think part of the problem is that the SEC and CFTC are jockeying for jurisdiction, so that encourages them to bring actions to plant their flags.

I think it also encourages them to only bring actions they’re confident about winning, which is why the CFTC brought a minor action against a small player. They want to be seen as having that jurisdiction, but also as being reasonable. It’s a fine line to walk.

Hey Daimon, appreciate you digging in. Responding to you below:

Did Counsel explain why 3 entities are required as opposed to 2 or even one? I understand how having 3 entities looks attractive but is it necessary from a business standpoint?

The Cayman foundation will have limited role administering the grant
endowment and effectuating grants.
o The Panama foundation will maintain the protocol and constituent smart
contracts.
o In connection with forming the Panama foundation, it’s necessary to form a
Panama corporation, which becomes a wholly-owned subsidiary of the
foundation as part of the formation process. Given that the Panama
foundation is restricted from engaging in commercial activity, this entity would
be responsible for operating the GUI.

How does the Cayman entity avoid economic substance requirements in relation to its provision of IP back to the Panama entity? Or is the plan to create an office in the Caymans, hire staff and nominee directors? Get that wrong and the Caymans entity can be struck off.

Cayman won’t be housing the IP, and the intention for the Cayman entity is to
operate in a decentralized fashion in most optimal fashion.

4 weeks to do all this? Unlikely. Just getting the KYC and related documentation together could take that long. Unless you’ve only got 1 director on all the boards!

The plan was to start with preliminary slate of directors. Then tokenholders
could vote to approve additional directors at Cayman foundation. Counsel has
routinely done this within that timeline.

I have very deep reservations about setting up in Panama - it is easily at the bottom of my very long list of preferred jurisdictions. Aside from the geo-political complications for Panama, the main reason the idea doesn’t stack up is off-ramping, third party engagement and payments.

We’ve proposed using a Panama foundation and corporation for a few
reasons, including (1) the nature of the protocol/GUI layer, (2) Panamanian
foundations are non-commercial in nature and do not have beneficial owners
and, as such, are ideally suited for deploying the protocol, (3) Sushi is taking
in account FATF VASP guidance and the structure has been designed to
avoid engaging in VASP activity where applicable, (4) the corporate formation
process results in two entities that can separately house the protocol and GUI
layers, which reduces the need to form additional entities and (5) there is no
corporate level tax on these entities.

This should answer your pressing questions.

As I said, this is a really good start but I don’t think we’ve addressed the main concerns. These are not hypothetical issues either - I’m talking from experience in supporting DEXs.

There are still no answers regarding:

We know that getting the structure right is critical. At this point, the proposed corporate structure and choice of jurisdiction could hamper growth, rather than enable it.

I’ve never heard anyone in this space say Panama is the place to be. Which of Sushiswap’s peers are operating there? Has the team checked with them on their experience?

I’m not sure if it’s you (@Neiltbe) or external counsel advising on the structure but there’s merit in pushing the assumptions really hard on this one because from where I’m sitting, the proposed model doesn’t add up.

I really hope I’m wrong but I have a terrible feeling we’ll be re-visiting this soon.

@jaredgrey could we have this discussion before the end of 2022?

according to my insights.

Hey there. I have a call with Fenwick today to get a few remaining questions answered. Neil or I will report back with their answers for further discussion. I agree getting this initiative completed before EOY '22 is ideal.