The time has arrived for Sushi to discuss new tokenomics. An optimal token model should incentivize liquidity and promote decentralization. In addition, it should provide more equitable governance and sustainable economics. We propose a new token model that will help Sushi achieve these goals and, in addition, help bolster Treasury reserves to ensure continual operation and development.

The proposed token model is robust and offers several tried and true methods for promoting value and utility. In addition, we institute novel concepts to help promote maximum value for all stakeholders. Below is a brief tl;dr of the proposal for your convenience. We welcome your questions and feedback to help us discuss the model over the coming weeks as we plan for a productive 2023.

Although we provided some of the highlights of the token model we’re proposing, please read the complete proposal that we put together, linked below. It is a comprehensive overview and will likely answer many questions. Please post any unanswered questions in the comments below. 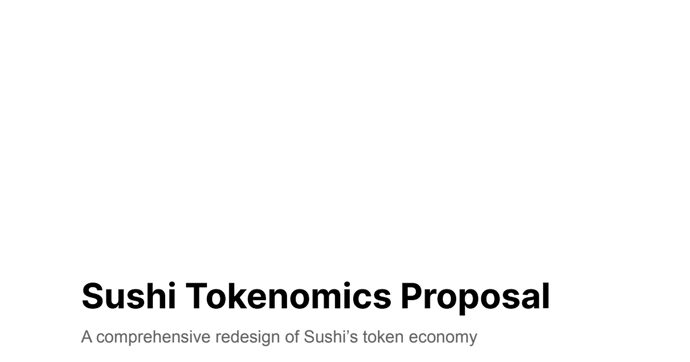 Ultimately, our goal is to help provide long-term value for token holders and liquidity providers without extractive qualities and detriment to either party. This new model promotes a holistic and sustainable value that scales with the DEX while boosting deeper liquidity to help revitalize the Sushi ecosystem.

Tokenomics not being my strongest suit, I’m going to wait for some feedback from others.

After diving deep into the fundamentals of this. I’ve concluded this proposal is behind my basic knowledge and I’ll side with Nike Jr.

Technically, if xSushi rewards become emission-based, the accrued xSushi/Sushi bar reward burn for withdrawing collateral before stake maturity isn’t removing any circulating supply. Or did I get it wrong?

Also, for the burns stemming from collected fees, since they occur before rewards payout, how would you mitigate front-running?

Key challenges that Sushi faces, even with the revised tokenomics:

(1) Competition against DEXes like Uniswap that have 0 protocol take rate.
(2) DeFi TVL exiting for juicier yields in TradFi.
(3) > 90% of treasury assets are in [$SUSHI]

This proposal definitely improves upon the current unsustainable emissions and incentive alignment.

A few points to add:

I’m not a fan of “punitive” mechanisms but open to linear or exponential time-decay for how much the pending rewards are burned. Alternatively, a similar outcome could be achieved where we assign reward weighting based on TVL*time (akin to GMX’s multiplier points or TraderJoe’s veJOE), so that LPers are incentivized for long-term participation without it feeling “punitive”.

disclosure: I am an user of Sushiswap as well as a contributor to several defi projects, most relevant one for this discussion is Redacted Cartel, which created the Hidden Hand marketplace for bribes and incentive alignment. My opinions are my own.

Hi Carnation, I appreciate your thoughtful post & suggestions. I hoped that our model proposal would promote contributions of ideas to make it the best it can be, & we’ll discuss the ideas you presented. Also, if you’d like to chat via DM, don’t hesitate to contact me on Discord or in forum DM. Thanks!

This post highlights why Tokenomics needs to link to Sushi growth strategy.
Sushi LPs, xSushi, Sushi holders and Users are all interlinked.

perhaps a better way would be to use a ve-token/gauge/bribe system where protocols can bribe veSUSHI holders to increase emissions into the protocols’ own pools. In this gauge system, veSUSHI holders benefit from receiving the bribes, which increases the yield of SUSHI tokens.

Personally I like the ve-token/gauge/bribe system as it can be can align incentives for governance voting, locked sushi staking as well as encourage third party LP/voting participation. Main downside is complexity and technical effort to tailor to specifics of Sushi project.

Disclosure - xSushi holder and have created and participated in Sushi LP pools.

What is the duration we are looking at for the 3 different time-locked tiers? Like a week for the shortest?

This chart shows the time-lock tiers for LP pools and Sushi Bar. 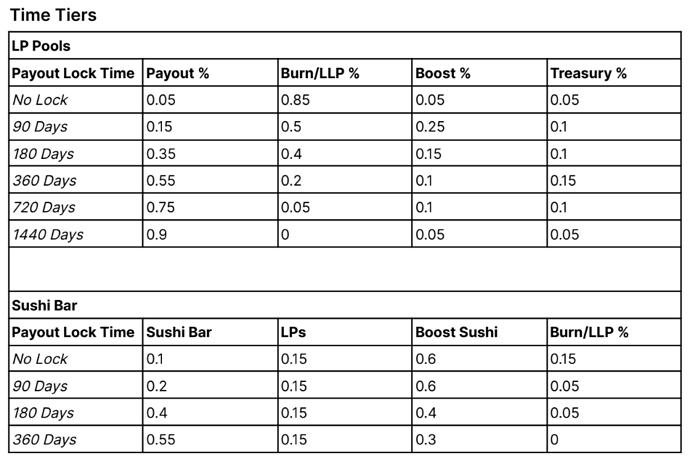 I probably don’t get it, but currently LPs got a 0.25% fee and 0.05% goes to xSUSHI (well, treasury after Kanpai). LPs also get some emissions. Are we now giving some of the 0.05% to the LPs for locking their liquidity and taking away their emissions?

LPs still get 15% of emissions. Please note the column in the sushi bar called LPs, which will going forward be the emissions distro. The other categories for emissions are Boosts (targeted LPs, and Swappers), and burn/LLP.
I think it’s important to note, volume makes the monies. We are addressing this by both tokenomics and product stack improvements. The goal is for them to work hand in hand to increase our attractiveness for liquidity providers and encourage behavior that generates both income, and a positive impact on the ecosystem.

Sorry, you totally lost me there… let’s make this a bit simpler…

The biggest problem that Sushi has is emissions and the lack of volume to support it. Here are some of my thoughts of the new tokenomics and some additions.

“Less than 2% of xSushi stakers provide liquidity in any Sushi pool.”

Why must token holders of SUSHI be punished for not providing liquidity? Sushi token holder are doing their part by buying into the token. Must an apple stock holder buy apple products? The sushi holder and the liquidity providers are two different users and shouldn’t be clumped into one. If LPs are not be rewarded fairly thats a different problem to be solved

This is a great idea. LP need to be providing actual value. This reduced farmers from jumping from one protocol to another.

Right now 0.35% is given to LPs and 0.05% is given to xSUSHI stakers, the new tokenomics mentions this will be dynamic based on the pools making it more “competitive”. Reducing fees will make the pools much more competitive and generate more volume.

What I don’t see why the 1/6 ratio should be changed. If we don’t think the 1/6 is fair to LPs? Sure lets change the ratio but I would like to see it fixed rather than kept dynamic.

All this is great and I’m all for this.

Not a fan. Emission should be based on buybacks. No more sushi diluted. Thats how we got here.

Vol distro is a reward for swappers who meet a specific volume minimum and target to maximize a refund of the fees paid, which allows high-volume traders to negate fees.

Why do this? Lets the swappers pay the fees. Protocols like 1inch handle this. We will get fees for the capital effiency we have.

locked liquidity get added to a Sushi LP pool by converting half of the amount to Sushi and the other half to the base pair selected for the pool.

This does create a buyback model but this reduces liquidity from a single pool.

Burns don’t provide anyvalue instead of pumping price. It is the same than Apple stock buyback program in which shareholder are rewarded of keeping stock (Pancake Swap is also buying back CAKE , price of CAKE is similar than Sushi).
The cash could be used in a ration 60% for Sushi DAO (development, project) and 40% in a form of dividend to token stackers in veSUSHI (1 to 4 year lock).
veSUSHI give LP provider increased yield by more fees for you less to the governance…
I prefer dividend and cash from Sushi rather than pumping price. ( I need cash no a higher token price, which I have to sell)

Hi Cryptoinvest. Our model’s buyback and burn mechanism contributes to a stable supply or focuses less on price because that is driven as much by macro sentiment and environment as the project’s fundamentals. However, it should produce a positive effect, yes. But, the goal is to target a predictable token supply by burning an amount that scales with volume increase alongside a static emissions APY.

Sorry, you totally lost me there… let’s make this a bit simpler…